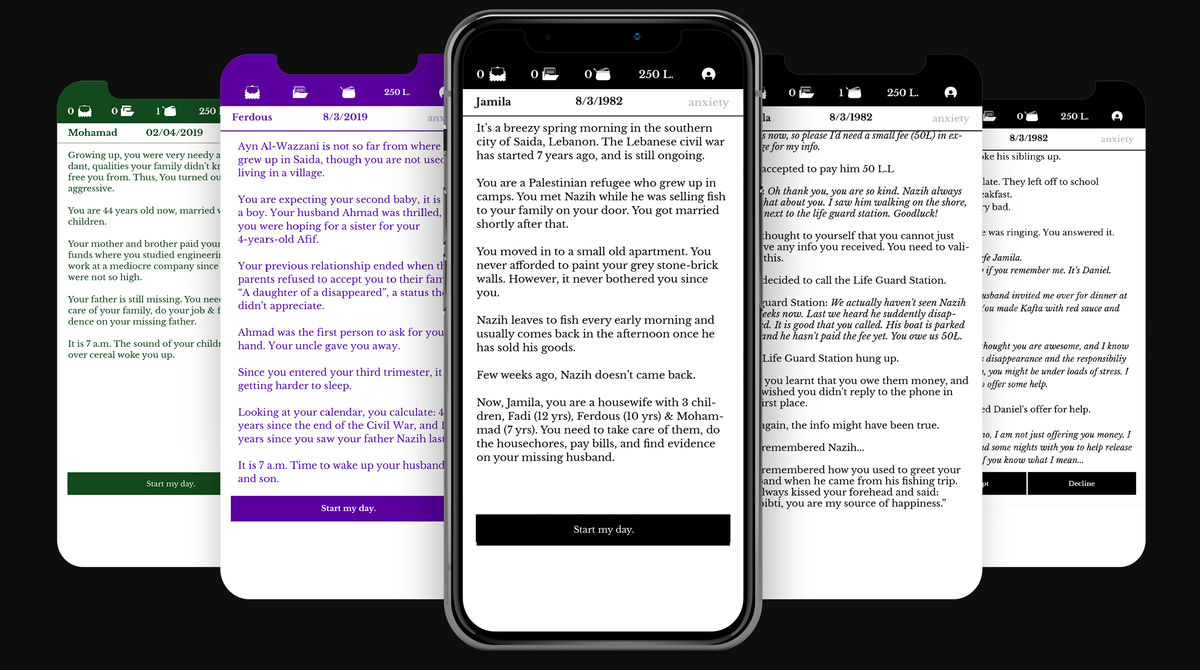 Was hat dich zu diesem Projekt inspiriert?
We are surrounded by war and conflict. We tend to list the number of casualties and the extent of material destruction, but we barely ever mention the people who disappear. Those people are called enforced disappeared. Their families live their lives trying to find them, facing many barriers and barely getting any recognition. They suffer from a psychological state called ambiguous loss, which undergoes a ripple effect, affecting the generations to come.

Was ist genau deine Projektidee?
My project is a mobile interactive narrative that aims to achieve empathy with the families of the enforced disappeared in order to raise awareness on this global ongoing phenomenon. In my game/experience, you play the role of a family member of a disappeared person, and you need to go through the harshness of life while also searching for your missing loved one.

Was sind deine konkreten Aktivitäten?
My project is based on a journalistic approach where I conducted a series of at least 10 interviews with families of the disappeared in Lebanon. It also included an in-dept research on the psychology of these people, starting with Freud's Mourning and Melancholia reaching Boss's Ambiguous Loss. Based on my research, I created the story of my project «Unresolved».

I designed a mobile interactive narrative that places you in the shoe of a relative of an enforced disappeared. It is text-based, and you have to make decisions. Each decision you make have a huge impact on the story, and on the personalities of the people around you in the game, especially your children. The anecdotes of the game are highly inspired from real case studies and interviews I conducted with the families of the disappeared.

«Unresolved» was my masters project at HEAD, Geneva, and is now on a tour in several countries, including India, China and Belgium, in an exhibition called «Play Me a Story».